Agra: Tips Visiting Taj Mahal And What Not To Miss

Agra is a city known worldwide for the presence of the Taj Mahal and is one of the highlights for many people who visit India. The city center of Agra is less appealing, thanks to the Taj Mahal, which gives the city’s impression. Some people don’t even bother staying in Agra and just come for one day to visit the Taj Mahal.

After our two nights in Delhi, it was about time to leave the capital behind and see something different. Agra is about three hour drive from Delhi. We were fortunate to get out of the city before the traffic began.

Hiring a car with a driver is the most comfortable way to get from one place to another. Probably not the cheapest mode, but it saves time. However, it was a long search online. With help from other travelers, I found a reliable local site in Delhi, Namaste India Tours.

Wander through The Agra Fortress

Before heading to the Taj Mahal, we first drove to Red Fort. It’s a similar pattern to the forts in Delhi, but after doing some research – it seems the Agra Fortress is better preserved. So we deliberately didn’t visit the Red Fort in Delhi.

The fortified building is the largest in the Mughal Empire and contains several buildings over almost 2.5 kilometers. Strolling inside brought some formal occasions that each had a contribution that could see all over the place. On top of that, the courtyards and beautiful gates are brilliant with excellent pieces of Indian history.

The entrance fee costs 600 INR, and if you have a ticket from the Taj Mahal – you receive a discount. Also, beware that you need a lot of patience while queuing, the hawkers outside can be irritating, but I guess you already know how to deal with them.

One Of The beautiful Complex Inside Taj Mahal

You don’t miss a lot while in Agra, because there’s only one in the city famous for the Taj Mahal. A magical place, arguably the most famous mausoleum in the world, the highlight of India. As one of the busiest cities in the country, you’ll be dealing with all kinds of people before you reach the complex.

If coming by car, your driver will drop you off at the parking, a 10-20 minute walk to the entrance. If you don’t like to walk, there is a tuk-tuk around for 100 rupees. Please do not give them more than they ask; that’s the regular fare, as our driver told us. However, walking is faster – a shortcut will bring you to the ticketing counter in less than ten minutes. Unfortunately, the tuk-tuk is not allowed to go near the gate. So you still have to do the walk.

Be Aware Of Scammers Outside!

Scammers and hawkers are experts on how innocent tourists get into their hands, don’t let them crank you. The truth is, you can’t get rid of them that quickly as they don’t take no for an answer and keep following you.

They’re offering cheap tickets for the Taj Mahal, while the official tickets are only available from the registered gates and online at a World Heritage Site in India. All other places and sellers are not authorized and, therefore, not recommended.

The Three Gates In Taj Mahal

There are three access gates for the Taj Mahal: the west, east, and the south, all of the three have their benefits and disadvantage. For example – the South Gate opens from 8:00 AM to 5:00 PM – the fastest option for daytime access.

And for Eastern Gate – open from sunrise to sunset and less crowded, but one kilometer to the entrance. This gate is an alternative for people with an e-ticket to have quick access.

The West Gate – is also open from sunrise to sunset and right next to the entrance, but it usually has long rows. When we arrived at the gate, it was too busy, and so many tourists, and after getting our tickets, we moved on to other long lines for the backpack controls. To avoid any delays, make sure to read on the website of the Taj Mahal what you can take inside.

The entrance fee to the Taj Mahal costs 1300 INR (16 euros) for foreign tourists. After getting your ticket, you will go to another line to get your free water bottle and a shoe cover. The shoe cover is necessary for the mausoleum. And if you plan to visit the Baby Taj and Agra Fortress, keep your card; it gives you a discount on the mentioned site. The complex of the Taj Mahal closed on Friday. So plan your trip accordingly.

The White Marble Mausoleum Of The Taj Mahal

I understand why millions of people visit the Taj Mahal every year. As we walk through the entrance gate, the first glance I have was the 58 meters high marble dome – the most impressive part of the building.

The main tomb is reflected in the water of the lotus pond, which makes the world-famous picture. But it was impossible to take good photos with people in the surrounding. They all want to pose with the Taj Mahal in the background.

Read more>>>Unmissable things to do in Delhi

I conquered my mission after waiting for so long to see this beauty. Even though it was overfilled with people, I disregarded around me and enjoyed the sight of the Taj Mahal.

The majestic buildings have risen from the ground like sparkling diamonds. Taj Mahal is on a UNESCO World Heritage Site since 1983 and has been one of the Seven New Wonders of the World since 2007.

Take the time to look around because there is so much to discover. On both sides of the Taj Mahal are two identical red sandstone buildings. The mosque and the house are both structures consisting of a long hall with three domes. Foreign tourists with high-value tickets were allowed to visit the museum with a detailed explanation of the construction of the symmetrical marble structure and what preceded it.

Meet the smaller version of the Taj Mahal only 10 min away. The entry costs 300 INR, but you receive a discount by showing your ticket from the Taj Mahal.

The small mausoleum in a marvelous place is lovely to wander around and less crowded. It makes it easier to take some photographs with a few people around you. Many visitors to Agra don’t bother visiting the Baby Taj as they think it is not worth it. Fairly to say, it might not be famous as the prominent mausoleum, but you won’t regret if you include Baby Taj during your visit to the Taj Mahal.

It consists of one big square garden in the middle, some identical buildings at the beginning and beautiful stonework—much more to see inside than the Taj and absolute masterpiece. The mausoleum is the burial site of Mizra Ghiyas Beg – an influential figure from the Mughal period.

The Abandoned City Of Fatehpur Sikri

If you are doing the route from Agra to Jaipur or vice versa, it is worth stopping by Fatehpur Sikri. However, coming from Agra is about 40 kilometers – which is more than a one-hour drive. Fatehpur Sikri is a fully walled city that was abandoned just a few years after its construction in 1610.

It took 15 years to build the whole complex but neglected due to a shortage of drinking water, and today looks like a ghost town. The entire complex is in excellent condition, with eclectic architecture and Hindu and Muslim styles. Fatehpur Sikri is on Unesco’s list as a cultural heritage site, thus genuinely worth a visit.

Additionally, if one comes in a private car, your driver drops you off in the parking and takes the bus for 10 rupees, which is the only way to reach the walled city.

Nevertheless, we’ve warned by our driver before getting out of the car to ignore the hawkers, but I already knew what he meant. On the way to the bus stop, you pass through the souvenir shops. The sellers here can be more persistent than in other places in India, so be mindful.

TIP: Admission to Fatehpur Sikri costs 600 INR. So if you want to avoid the crowds, come on other days except Friday, as it’s a holy day for Muslim worshipers.

Where To Stay In Agra City

Agra is one of the busiest cities in India due to its famous attractions; however, many people come to Agra for one day to see the Taj Mahal. For those who spent the night, there are assuredly plenty of accommodations to choose from cheap guesthouses to expensive hotel rooms. As we’ve booked a package, it all includes lodging, and being honest; they’re pretty good.

We’re staying at Hotel Crimson Palace near the Taj Mahal. A convenient location close to the city center. The hotel is popular with tour agencies and can sometimes get crowded. As a three-star hotel, the measure of your place in other Asian countries like Brunei and the Philippines cannot be the same here. You’ll see the building quite impressive outside and the hotel lobby, but the image you see in the room is somewhat less. Despite all that, they have friendly and helpful staff; also, they provide free wifi, which is a great benefit. 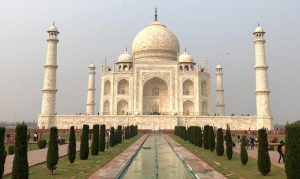 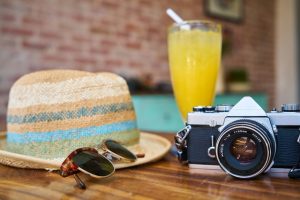